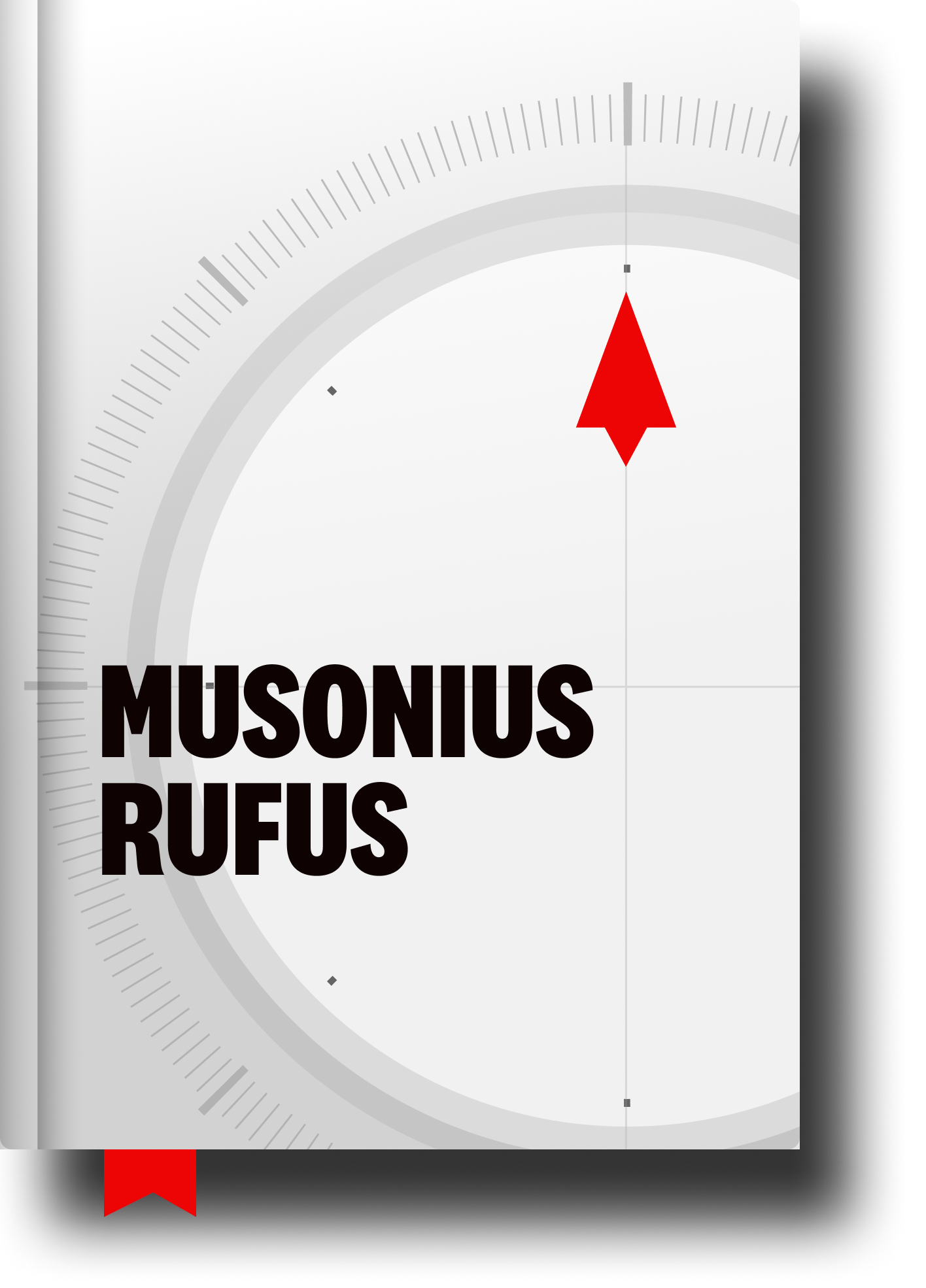 by Cynthia Arrieu-King and William B. Irvine

In our last +1, we got some great marriage advice from the Roman Socrates, Musonius Rufus.

He told us that: “When this mutual care is complete and those who live together provide it to each other completely, each competes to surpass the other in giving such care. Such a marriage is admirable and deserves emulation; such a partnership is beautiful.”

As I said, that’s probably THE best marriage advice I’ve ever received.

Although pretty much lost to history, he was a Stoic Boss back in the day.

He was born in 25 AD—almost exactly 25 years after Seneca and 25 years before Epictetus (who was his star student and influenced the guys who taught Marcus Aurelius who was born 100 years after Musonius).

Musonius never wrote anything but, like Epictetus and Socrates, he had a great student who took great notes. His student’s name was Lucius. (Socrates had a guy named Plato take some good notes. Epictetus had Arrian.)

Today we’re going to open up our tattered collection of his wisdom to another one of his lectures.

This one’s on “whether practice or theory is more effective for acquiring virtue, given that theory teaches what we ought to do and practice is demonstrated by those who have been trained to act in accordance with the theory.”

Short answer: “Theory which teaches how one must act assists action and logically precedes the practice, for it is not possible for something good to be accomplished unless it is accomplished in accordance with theory. But as a matter of fact, practice is more important than theory because it more effectively leads humans to actions than theory does.’”

Longer answer: “He gave lectures like this to his companions as he vigorously trained them in their practice of philosophy: virtue, he said, is not just theoretical knowledge, it is also practical, like both medical and musical knowledge. The doctor and the musician must each not only learn the principles of his own skill but be trained to act according to those principles. Likewise, the man who wants to be good must not only learn the lessons which pertain to virtue but train himself to follow them eagerly and rigorously.

Could someone acquire instant self-control by merely knowing that he must not be conquered by pleasures but without training to resist them? Could someone become just by learning that he must love moderation but without practicing the avoidance of excess? Could we acquire courage by realizing that things which seem terrible to most people are not to be feared but without practicing being fearless towards them? Could we become wise by recognizing what things are truly good and what things are bad but without having been trained to look down on those things which seem to be good?

Therefore practicing each virtue must always follow learning the lessons appropriate to it, or it is pointless to learn about it. The person who claims to be studying philosophy must practice it even more diligently than the person who aspires to the art of medicine or some similar skill, inasmuch as philosophy is more important and harder to grasp than any other pursuit.”

Theory? It’s a necessary start. But it’s not sufficient.

We must PRACTICE our philosophy.

And, one more time: “Therefore practicing each virtue must always follow learning the lessons appropriate to it, or it is pointless to learn about it.”

Plus: “The person who claims to be studying philosophy must practice it even more diligently than the person who aspires to the art of medicine or some similar skill, inasmuch as philosophy is more important and harder to grasp than any other pursuit.”

Here’s to practicing our noble behavior.

btw: I especially (!) loved that whole lecture from Musonius’s Lectures and Sayings because our Mastery Series (and Coach program) is ALL (!) about helping us move from Theory to Practice to Mastery. Shall we?

by Cynthia Arrieu-King and William B. Irvine