In our last +1, we talked about the fact that, as per the brilliant Professor Harari, The Scientific Revolution that kicked off 500 years ago and so profoundly changed the world was started by a bunch of ignoramuses who were willing to admit all that they DIDN’T know.

I’d like to revisit that theme for a moment and share a couple of maps to bring the point home.

Let’s take a quick look at a couple of world maps.

This one was created in 1459 right before The Scientific Revolution kicked off: 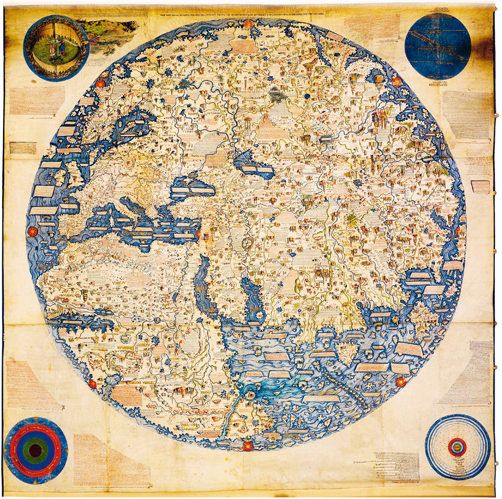 Do you notice anything different? (Hah.)

Before The Scientific Revolution, map makers COMPLETELY filled in their maps. There was literally NO EMPTY SPACE. They’d even fill in parts of the world about which they knew NOTHING. Seriously. They’d just make stuff up to fill up the empty space—pretending they knew something about which, again, they knew absolutely nothing.

Then what do we see after the start of The Scientific Revolution?

We see a LOT of empty spaces.

We see a willingness to say, “we don’t know what’s there!”

As Yuval Noah Harari puts it in Sapiens: “The empty maps were a psychological and ideological breakthrough, a clear admission that Europeans were ignorant of large parts of the world.”

And you know what typically follows that willingness to admit ignorance? LEARNING. Knowledge. Growth.

But ONLY if we’re willing to honestly appraise our world and draw accurate maps with LOTS of empty space.

Is it all filled in? Or do you have a lot of empty space?

Pro map-making tip: Let’s leave the space beyond our current reality/right outside of our current comfort zones nice and empty.

Then let’s go explore the edges of our potential and see just what we’re capable of!! 🤠